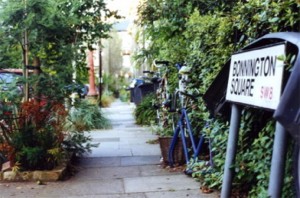 The Pleasure Garden, regarded as one of the finest community gardens in London

In the early 1980s a large number of properties in Bonnington Square, Vauxhall, were acquired for demolition by the then Inner London Education Authority in advance of proposals to build a new school on the site. They were left empty and would have become derelict but for the intervention of a group of people who could see how they could be brought back into use on a temporary basis

They formed a housing co-op and negotiated with ILEA which eventually  agreed to lease the properties to South London Family Housing Association, which handed over the management to the co-op. The co-op did up the houses, transformed the area and even opened a community café.

Years later plans for the school were eventually dropped and of course the properties had been saved. Today, there are various forms of tenure in the Square ranging from tenants to shared owners and even owners, but the amazing thing is that it was saved from dereliction and has gone on to provide a much sought after place to live. 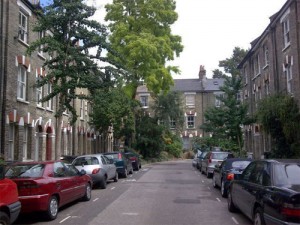 It’s a brilliant example  of how buildings can be preserved, money can be saved, people can be housed and how the environment can be enhanced!.

Funded by grants and local sponsorship, the garden includes a water wheel and  lush, sub-tropical planting. Widely reported in the media, the Pleasure Garden is today regarded as one of the finest community gardens in London.

The Bonnington Café is a co-operatively run vegetarian and vegan restaurant in the Bonnington Square Community Centre in the heart of Vauxhall.One of South London’s best-kept secrets tucked amidst the beautiful community gardens of the square, the Café has been open since the early 80’s when it was started to provide a good cheap meal for the community living in the Square

No single person runs the restaurant, rather it’s maintained by an active collective of member cooks who also contribute to the overall running of the venue and who are still committed to providing excellent vegetarian home-cooking at great prices in a laid back and friendly bohemian atmosphere.

The Café’s regulars have been coming back for years, they love dinner by candlelight, a burning fire on a winter night, and the sense that they are part of a community. Our cooks are from all over the world, so the menu will be different on any given night. From Japanese to Medieval inspired; and from new Italian and French to new American…each cook brings their own style and background to the Café’s veggie fare.