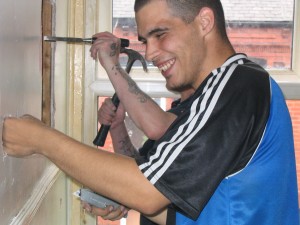 Self-help housing has been around for a long time in various forms. After the Second World War many families became involved in making use of disused military camps and temporary housing.

More recently, throughout the 1970s and 1980s there was a boom in short life housing schemes and co-ops, as empty properties became available -often as a result of council redevelopment programmes. With the upturn in the property market in the 90s and into the 00s the number of projects shrank.

However,  are still a number of successful projects around in various places  ( see Directory of Existing Projects [2]), but it’s not always easy to find out who they are,  where they are,  what they do and exactly how they operate.  So much so, that very few people are probably aware that it’s possible to legally get hold of empty properties and set up some sort of housing project.

At present there are only about 50 self-help housing projects in England and Wales making use of empty property. They vary from those managing only a few tenancies to those managing several hundred. However, there could easily be at least 10 times as many projects if people had the information and necessary funding was available to enable them to set something up.

Some owners will never agree to letting their properties be used on a temporary basis, but many others ( particularly local housing authorities and housing associations who exist to provide housing ) can be persuaded. They may not have any particular plans to deal with their empty properties and so approaching them with an outline proposal for their use could be the first step.

It’s important to realise that there’s no right or wrong proposal  – it’s a question of coming up with something that will work in whatever local circumstances prevail.

The directory of existing projects [2] and Case Studies section [3] provide details of what’s happening now which are intended to help people see what they might be able to achieve.

It’s amazing what some people have been able to achieve by simply starting off with one or two borrowed properties.

Self Help Housing – How It’s Done [4]then goes on to help people wanting to set up a new project, work out how to go about it.